“Cozy” mysteries are one of the most popular genres in the Aurora Public Library District. Cozies are perfect for light summer reading and for long, cold winter nights. If you’re not familiar with the cozy genre, these books are the “gentle reads” of the mystery titles – no gore or graphic content. The crime is typically solved by an amateur detective who happens to stumble across a dead body from time to time, and the setting is often a small, quaint village. Each series may have a large number of books; however, even the best of series eventually come to an end. That’s why we’re always on the lookout for new series of Cozies. Here are the newest additions to our cozy collection – the first books in brand-new series.

The Library District has lots of ongoing series of cozies featuring themes like cooking, bookshops, pets, or even chocolate! Just jump in and see which authors you enjoy. There are great resources online about this genre, so don’t forget that we can also borrow from other libraries, if you find a series we don’t have. Here’s a great website to check out if you want to see the amazing variety of books in this gentle category: Cozy Mystery List

August 26, 2020 marks the 100-year anniversary of the ratification of the 19th Amendment to the U.S. Constitution, granting women the right to vote. This right may be taken for granted today, but it was the result of decades of hard work, protests, and even jail sentences. Displays are in place at both the Aurora and the Dillsboro Public Libraries with books, quotations, and historical photographs. When looking for a book on the topic, don’t forget there are additional resources available to download through Overdrive or Libby.

In addition to our display, there are many wonderful resources online that illustrate the perseverance and sacrifices of the American suffragettes. Many of our national institutions have compiled special collections for this anniversary year, so check out these links for more information.

From the Smithsonian Institution: https://www.si.edu/spotlight/votes-for-women

From the Library of Congress: https://www.loc.gov/exhibitions/women-fight-for-the-vote/about-this-exhibition/

From the National Archives: https://www.archives.gov/women/suffrage

From the National Park Service: https://www.nps.gov/subjects/womenshistory/19th-amendment.htm

We’ve always had quite a few homeschool families in the Library District. Recently we have taken steps to update our collection of resources to help those families. Many of these newer titles might be interesting to other parents as well, so click on these links to get more information. We also have items on display at both the Aurora Public Library and the Dillsboro Public Library, including packets of information about some of our other educational resources.

As always, we’re happy to request items from other libraries, if we don’t have exactly what you need. Just talk to a staff member, or click here to request an item through Inter-Library Loan. 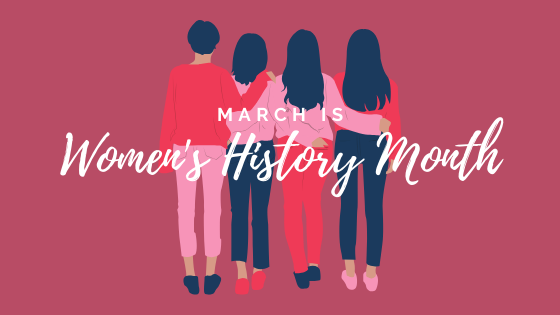 Women’s History Month is a national, month-long observance of the often overlooked contributions of women in history and contemporary society. In the United States it is celebrated in March to coincide with International Women’s Day on March 8th.  The first National Women’s History Month was celebrated in 1987, but it was celebrated by smaller communities long before then. The process took years of hard work and lobbying by women to gain the recognition they deserved.

In 1979, a fifteen-day conference co-sponsored by Sarah Lawrence, the Women’s Action Alliance, and the Smithsonian Institution was held at Sarah Lawrence College in New York. The conference was organized by one of the professors at the college, Gerda Lerner. Her goal was to introduce female leaders with diverse backgrounds to the possibilities of women’s history. Lerner, along with historians Alice Kessler-Harris and Amy Swerdlow, challenged the participants to create one large group project. Their chosen project was to make the celebration of Women’s History Week, an event already celebrated by some schools, communities, and women’s organizations, a national event.

At the end of the conference, the women returned to their homes all across the country and began the campaign for a National Women’s History Week. They planned and scheduled publicly sponsored women’s history programs at both the local and national level. The women successfully lobbied for national recognition, and in February of 1980, President Jimmy Carter issued the first Presidential Proclamation declaring the Week of March 8 as National Women’s History Week.

The National Women’s History Alliance, a non-profit organization dedicated to honoring and preserving women’s history, and a large contributor to the fight for a nationally recognized month, selects the yearly theme and honorees for Women’s History Month. The 2020 theme is “Valiant Women of the Vote” in honor of the 100th anniversary of the 19th Amendment. The theme honors women “from the original suffrage movement as well as 20th and 21st century women who have continued the struggle (fighting against poll taxes, literacy tests, voter roll purges, and other more contemporary forms of voter suppression) to ensure voting rights for all.” The 2020 honorees include Maria Teresa Kumar, Edith Mayo, Lucy Burns, Carrie Chapman Catt, and many other incredible women who have fought and continue to fight for voting rights for everyone. Click HERE for more information on this year’s theme and honorees.

You can learn more about women’s history, and celebrate Women’s History Month, by checking out our collection of books about women’s contributions to history and society! Click on any title to learn more!

The books shown here provide an interesting twist on historical fiction by focusing on the creation of a well-known painting or on the life of an actual artist.

Susan Vreeland is one of the best-known authors for this type of fiction. Her web page explains her love for art and contains her personal “Pledge to Art.”

Let your mind be immersed in another time and place while you learn about the inspiration behind these great masterpieces and artists.

If you have another favorite art-inspired novel, let us know!

There’s just nothing like a great spy novel to get your heart racing and the pages turning! Of course, the espionage genre is filled with unforgettable classics by authors like John Le Carre, Graham Greene, Frederick Forsyth and Robert Ludlum.  However, the authors writing spy novels today can hold their own with even the best of these well-known novelists. Check out these titles, all written in the last ten years. There’s a lot of variety in the settings, including World War I, World War II, the Cold War, and post 9/11. I hope you will find at least one new author to love.

Let us know which spy is your favorite!

“Most spies were amateurs: frustrated revolutionaries of the left or right, people who wanted the imaginary glamour of espionage, greedy men or lovesick women or blackmail victims. The few professionals were very dangerous indeed; they were not merciful men.”
― Ken Follett, Eye of the Needle

The Aurora Public Library District joins nearly 16,000 libraries and thousands of readers across the country in offering the first Together We Read: US digital book club selection. From February 19–March 4, Aurora Public Library District patrons can enjoy and discuss award-winning author Pat Simmons’ new Lean on Me romance e-book for free with no waitlists or holds. Readers can access the e-book with a valid library card by visiting https://iddc.overdrive.com/iddc-aurora/content or by downloading the Libby app, and then can participate in a discussion with other readers online.

Lean on Me tells the story of Tabitha Knicely, a woman overwhelmed with sorrow and exhaustion caring for her beloved great-aunt, whose dementia is getting worse. When her neighbor Marcus Whittington accuses Tabitha of elder neglect, he doesn’t realize how his threats to have Aunt Tweet taken away add to Tabitha’s pain. Then Marcus gets to know the exuberant elderly lady and sees up close how hard Tabitha is fighting to keep everything together. Tabitha finds herself leaning on Marcus more, and he’s becoming more than happy to share her burdens.

The Together We Read: US digital book club connects readers in America through public libraries with the same e-book at the same time. This two-week program only requires an Aurora Public Library District card  and PIN to get started.

The fight for Civil Rights in America is a continuing struggle, but it’s often difficult to know how to discuss these issues with our children. Here are some resources from the Aurora Public Library District that can help you on that path. Click on each picture to see the full description of the book in our online catalog. Some of my choices are for young children and others are more appropriate for older students, but reading the descriptions or clicking on the “Reviews” link for that book will often show you a recommended age level.

The quotations on this blog post are all from the book Powerful Words: More than 200 Years of Extraordinary Writing by African-Americans.

“… however variable we may be in society or religion, however diversified in situation or colour, we are all of the same family…”        Benjamin Banneker in a letter to Thomas Jefferson, 1791

” The student of American sociology will find the year 1894 marked by a pronounced awakening of the public conscience to a system of anarchy and outlawry which has grown during a series of ten years to be so common, that scenes of unusual brutality failed to have any visible effect upon the humane sentiments of the people of our land.”

“…the Fourteenth Amendment prevents states from according differential treatment to American children on the basis of their color or race.”   – Thurgood Marshall in Brown vs. Board of Education, 1953

“I was determined to achieve the total freedom that our history lessons taught us we were entitled to, no matter what the sacrifice.”    – Rosa Parks in Rosa Parks: My Story

“My right and privilege to stand here before you has been won – won in my lifetime – by the blood and the sweat of the innocent.”    – Jesse Jackson, 1988

“Now, more than ever before, America is challenged to bring her noble dream into reality, and those who are working to implement the American dream are the true saviors of democracy.”   – Martin Luther King, 1961

“We are attempting to fulfill our national purpose, to create and sustain a society in which all of us are equal.”   – Barbara Jordan, 1976

In February, the Aurora Public Library District will be hosting our first ever Beautiful Book Cover contest. We’ve all had that experience of seeing an absolutely gorgeous book for the first time! Now’s your chance to vote on your favorite. Yes, this is extremely subjective, and the contestants were selected by a possibly biased staff member, but let’s all celebrate the creativity and artistic ability of cover designers.

Here’s how the contest works. Beginning on February 1st, displays will be up at all three Library buildings. You can only vote once! Just take a ballot and record your 1st and 2nd choices for Most Beautiful cover. There will also be a space to write in a choice for “Most Inviting” (like “Miss Congeniality”). “Most Inviting” is for the cover that makes you most likely to read the book. Write-in candidates are allowed. Voting will also be allowed through the Library Facebook page: https://www.facebook.com/eAPLD.org/

You can vote through Saturday, February 22nd and the winners will be announced on February 25th. Everyone who participates will also get a chance to enter a drawing to win a bit of library swag!

Are you ready for some adventure? Just sit back and get comfortable, because these books will whisk you away to the City of Light! Of course, the library has many books set in Paris. This is just a small selection to get you started; you can choose the one that seems the most interesting to you.

While you’re in the library, pick up one of our Paris-themed DVDs to set the stage.

To learn more about the sights and neighborhoods of Paris, check out our newest Fodor’s guide or the non-fiction book Five Nights in Paris by John Baxter.