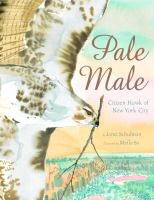 Pale Male, Citizen Hawk of New York City by Janet Schulman is a touching story of a love affair between 2 red-tail hawks and the people of New York City as well as other people from other countries of the world.
The story opens with the male hawk, Pale Male stopping by Central Park. Birdwatchers in the park named him Pale Male as he had beige feathers versus dark brown feathers of more mature hawks. His tail feathers were brown, which meant he was young. Red-tail hawks get red tail feathers when they reach 2 years of age.
Pale Male’s visit was unique because he did not leave. Most hawks stay a brief time at Central Park when they visit, as they prefer more quiet locations such as wooden mountains and farmlands. Pale Male’s presence created quite a stir among daily park visitors, birdwatchers, high-rise dwellers, and international visitors to New York City.

There are no upcoming events at this time.